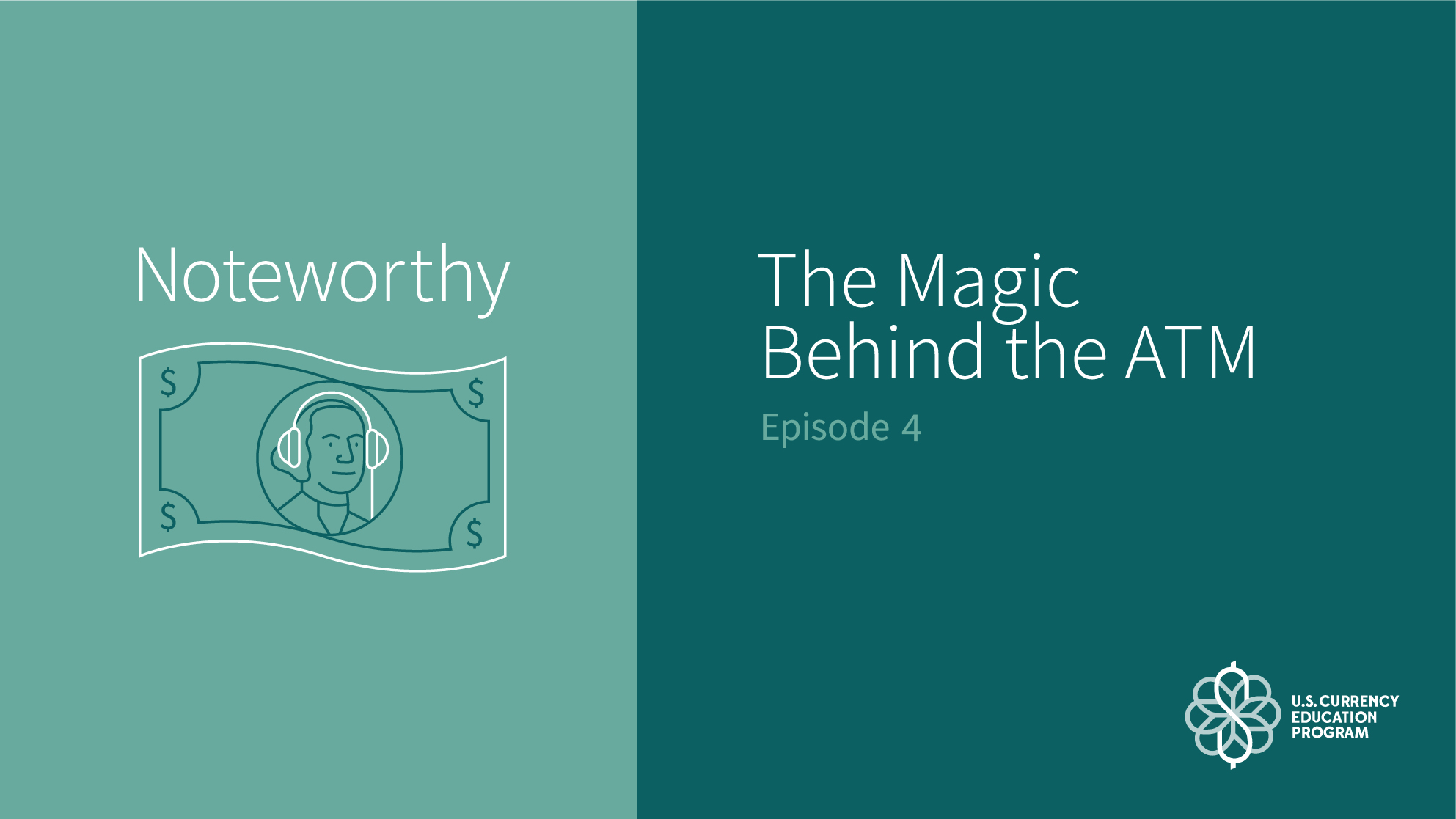 The Magic Behind the ATM

Podcast Four: The Magic Behind the ATM

ALEX: Hello, listeners! Thank you for tuning into another episode of Noteworthy, a podcast from the U.S. Currency Education Program. Joining me today is Travis.

TRAVIS: So Alex, I was hoping we could talk about where money comes from. You know, how bills make their way to local ATMs?

ALEX: Great idea, Travis! The life cycle of a bill is often misunderstood, so I think it makes sense to start from the very beginning.

TRAVIS: Which is the annual print order!

ALEX: Correct. Every summer, the Federal Reserve Board determines how much currency is needed for the upcoming year. The number of bills required is based on a few things. First, we estimate how much currency will be demanded by the public.

TRAVIS: To do that, we look at past demand for banknotes, which has proven to be a good indicator, while making sure to include some room for growth.

ALEX: Next, we calculate how much currency we expect Reserve Banks to destroy because the notes are unfit for further circulation or because of other factors, like the issuance of a new design. This is important because the majority of currency printed every year is to replace notes that are old or worn.

TRAVIS: After the print order is calculated, it’s sent to the Bureau of Engraving and Printing, or the BEP for short. The print order for fiscal year 2018 was approximately 7.4 billion bills, worth about $233 billion – now that’s a lot of money!

ALEX: The next step, of course, is for the money to be printed. People often think the Federal Reserve prints money, but that’s done at the BEP.

TRAVIS: And those armored carriers are the ones who fill my favorite ATM with money!

ALEX: Absolutely. But that’s not the end of the cycle! Let’s say you spend that money at the grocery store and the grocery store, in turn, pays it out to another customer. That money may change hands many times before a bank sends the money back to a Reserve Bank.

TRAVIS: Then it’s the Reserve Banks’ responsibility to process the bills to ensure that they are genuine and fit for recirculation. Each Reserve Bank has high-speed machines that process the banknotes to look for rips, soiling, and general wear and tear. Maintaining high-quality bills is essential so that people can recognize and use the security features in their money.

ALEX: Right! If the bills are genuine and still in good condition, they are sent back out to banks and other depository institutions to fill orders for currency. In that case, the money goes back to the public for another round of transactions. You may even see it at your ATM again!

TRAVIS: But, if the money is genuine and has seen one too many transactions, it’s shredded. Once the bill is shredded, that’s the end of its monetary life cycle! As you can imagine, the lifespan varies across the seven denominations. Some denominations, like the one-hundred dollar bill, last a long time because they are used as a store of value more than for personal transactions. Generally, the more a bill is used for transactions, the shorter the life.

ALEX: Exactly. The average life of one-dollar bills is over five years, while one-hundred-dollar bills last around fifteen years.

ALEX: All right, listeners, be kind to your money to increase the life of a bill! For more information on the annual print order or the life cycle of Federal Reserve notes, visit uscurrency.gov. As always, thanks for listening to another episode of