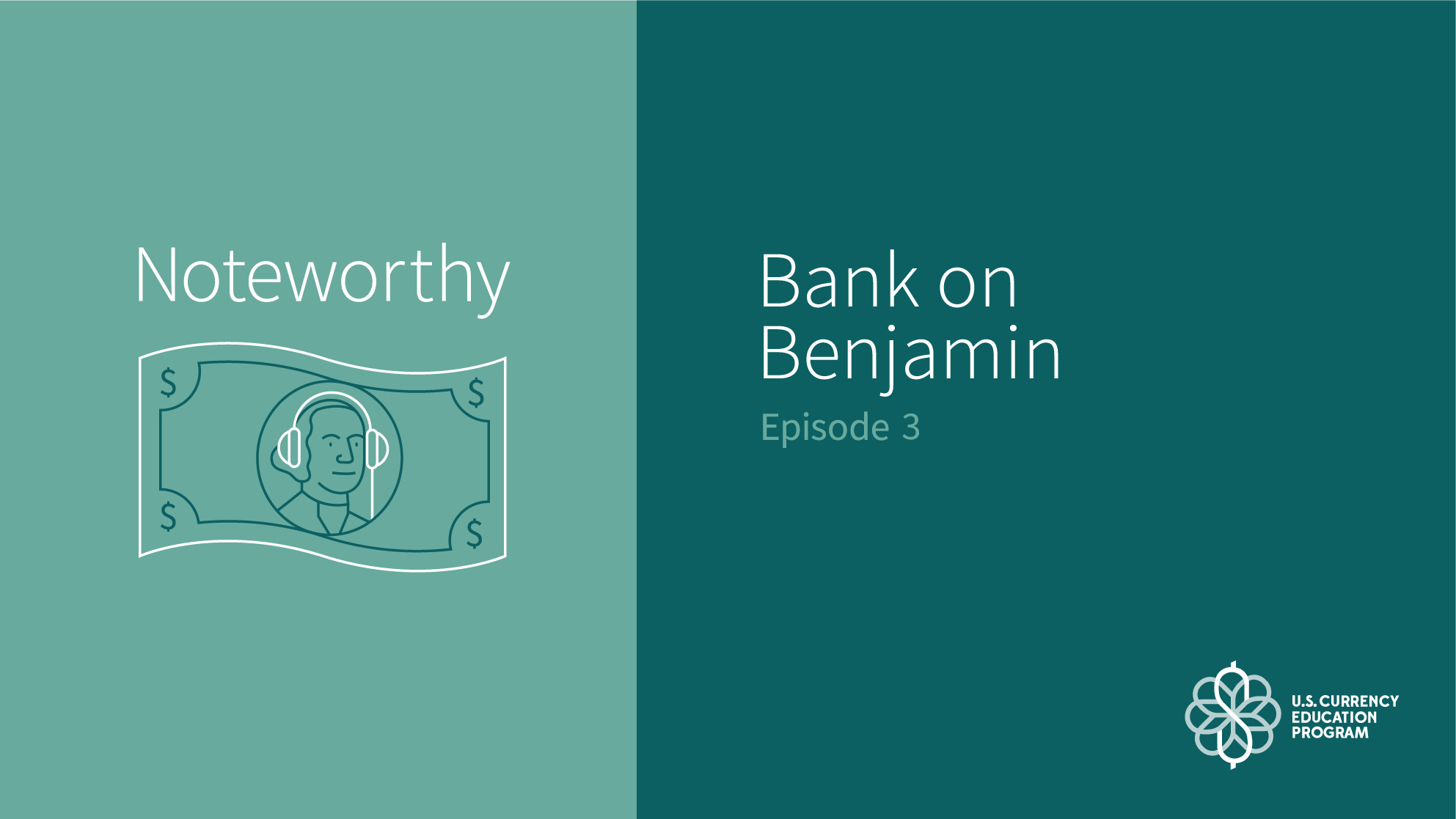 ALEX: Hello listeners! Thanks for joining another episode of Noteworthy, a podcast from the U.S. Currency Education Program. I’m here with Jill, and today we’ll be talking about my favorite Founding Father, Benjamin Franklin!

JILL: Hello everyone! So Alex, where’s the love for George Washington or Alexander Hamilton? I mean, why is Benjamin Franklin your favorite Founding Father?

ALEX: I’m glad you asked. There are a few reasons. First, did you know he was involved in the creation of America’s first lending library? He was also a scientist, inventor, diplomat…I really could go on and on. And did you know that Ben has been on the $100 dollar Federal Reserve note ever since they were first issued in 1914?

JILL: If there’s a bill everyone likes to receive, it’s definitely the hundred! I had no idea that Ben had been on the hundred for over a hundred years!

ALEX: What makes Ben even more interesting to me are his many ideas about paper money, beginning when he first arrived in Philadelphia. In 1729, he wrote a pamphlet called “A Modest Enquiry into the Nature and Necessity of a Paper Currency.”

JILL: And in it, he says currency is a necessity for a community to successfully conduct business and transact trade.

ALEX: Not only did Franklin write about paper money, he also printed it! Did you know he printed money for the Pennsylvania legislature in 1731? He was only 25 then! During his life, he printed banknotes for Pennsylvania, Delaware, and New Jersey.

JILL: Wow – only 25 years old? Printing money for the colonies, that’s pretty cool. Isn’t he famous for using nature in his printing?

ALEX: Yes indeed! Franklin used an amazing technique, where he printed images of leaves from plants on money, knowing that it would make each bill more difficult to replicate. Because the leaves he printed had such intricate detail and irregular patterns, he made things more difficult for counterfeiters!

JILL: I love that he used the nature around him to secure his banknotes.

ALEX: It really is incredible. And to think how things have evolved. Today we use things like color-shifting ink, security threads, and watermarks. I believe Franklin would be quite impressed with the methods we’re using to prevent modern day counterfeiting.

ALEX: It really is quite mesmerizing. But, getting back to the man of the hour… I also like the fact that Benjamin Franklin is one of the only non-Presidents to grace Federal Reserve notes today.

JILL: Me too! You know, Alexander Hamilton is the other statesmen who wasn’t a President. And he is MY favorite Founding Father. All right, listeners, I’m sure Alex could talk about Benjamin Franklin and the $100 note all day, but I’ll leave the rest of the digging up to you. If you’re interested in seeing a picture of Ben on a Federal Reserve note issued in 1914 or on any other design of the hundred-dollar bill, be sure to visit uscurrency.gov.