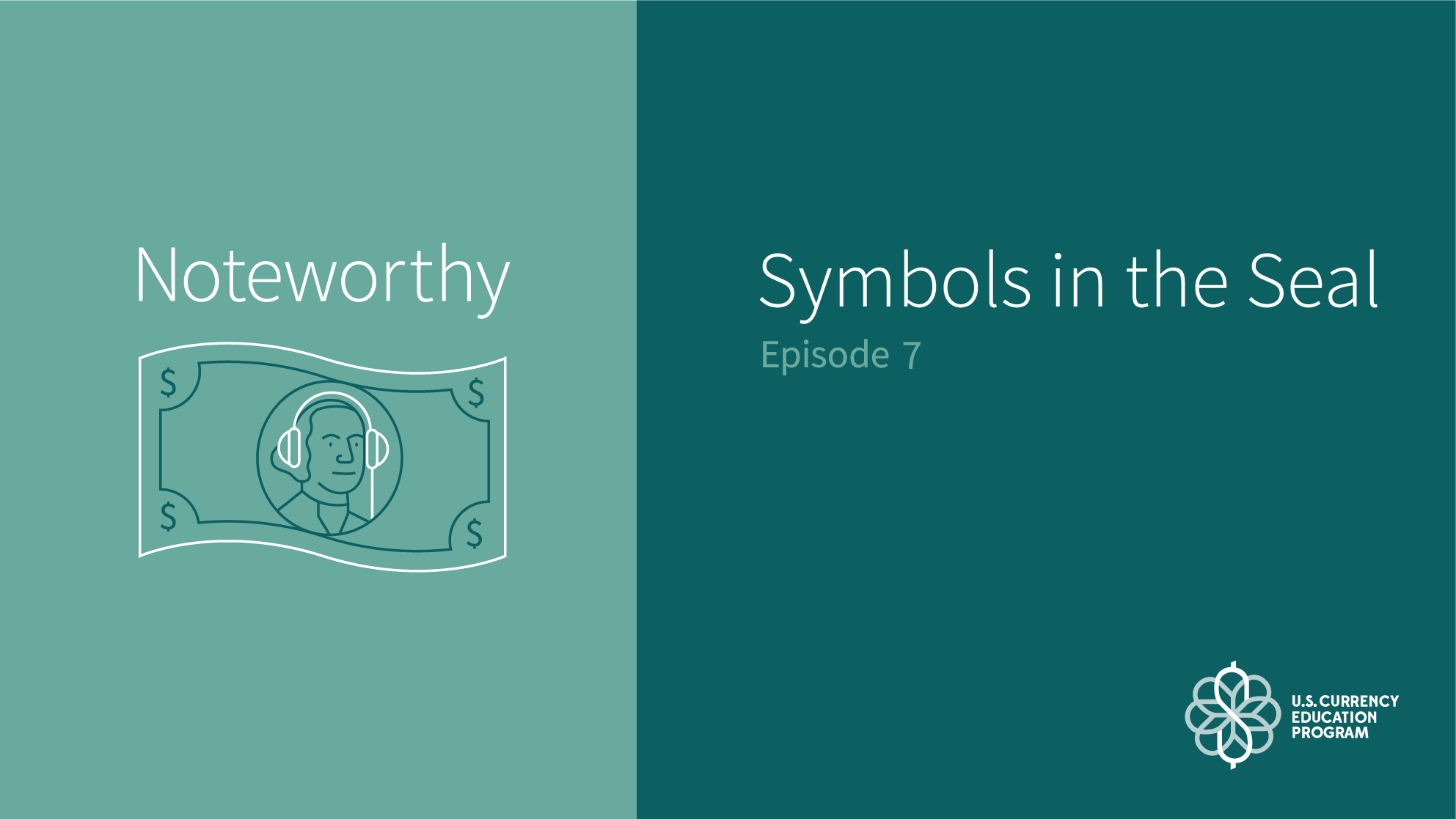 Symbols in the Seal

ALEX: Hello, everyone! Thanks for joining episode seven of Noteworthy, a podcast from the U.S. Currency Education Program. I’m Alex, and in this episode we’ll be taking an in-depth look at the back of the one-dollar bill. Joining me is Kristen.

KRISTEN: Hello listeners! Thanks for tuning in. I’m glad we’re taking some time to look at the one-dollar bill because it is by far the denomination I see most often.

ALEX: Fortunately, I have a one-dollar bill on me, so I’m going to go ahead and pull that out [ruffling sounds]. Listeners, if you have one, I recommend you do the same. The back of the note is my favorite because there are some really interesting symbols and designs that you may or may not have noticed before.

KRISTEN: Like the pyramid on the back of the note?

ALEX: Did you know that the design of the unfinished pyramid on the back of the note is from the reverse of the Great Seal of the United States?

KRISTEN: I think I’ve heard that before. Doesn’t the pyramid have 13 steps? And I’m pretty sure the roman numerals at the bottom stand for 1776.

ALEX: Correct! And the floating eye is actually called the Eye of Providence.

KRISTEN: Wow! Who knew the floating eye had a name?

KRISTEN: Very cool. I know that the olive branch and arrows represent peace and war. You may have noticed that the eagle is looking toward the olive branch rather than the arrows, which means that our nation desires to pursue peace but does stand ready to defend itself.

ALEX: Speaking of the eagle, did you notice that there are exactly thirteen arrows in the eagle’s talons? Oh, and thirteen vertical stripes on the shield? And thirteen stars in the constellation above the eagle?

ALEX: Well, the thirteen colonies, which became the thirteen original states were pretty important. But I agree, there are many instances of the number thirteen on the Great Seal and therefore on the one-dollar note. It’s something you may not notice at first glance.

KRISTEN: I also think it’s interesting that the eagle holds a scroll in its beak that reads “E Pluribus Unum.” In Latin, it means “Out of Many, One.”

KRISTEN: Oh really? What did his changes include?

ALEX: Well, President Roosevelt added the labels “The Great Seal” and “of the United States” underneath the two sides of the seal, and he switched the placement of the two, positioning the unfinished pyramid, or the reverse of the Great Seal, on the left side of the banknote.

KRISTEN: That’s so interesting. Well, listeners, I hope you found this information as fascinating as I did. I won’t ever look at the one-dollar bill the same way again. If you are interested in learning more about the one-dollar bill, be sure to visit uscurrency.gov.