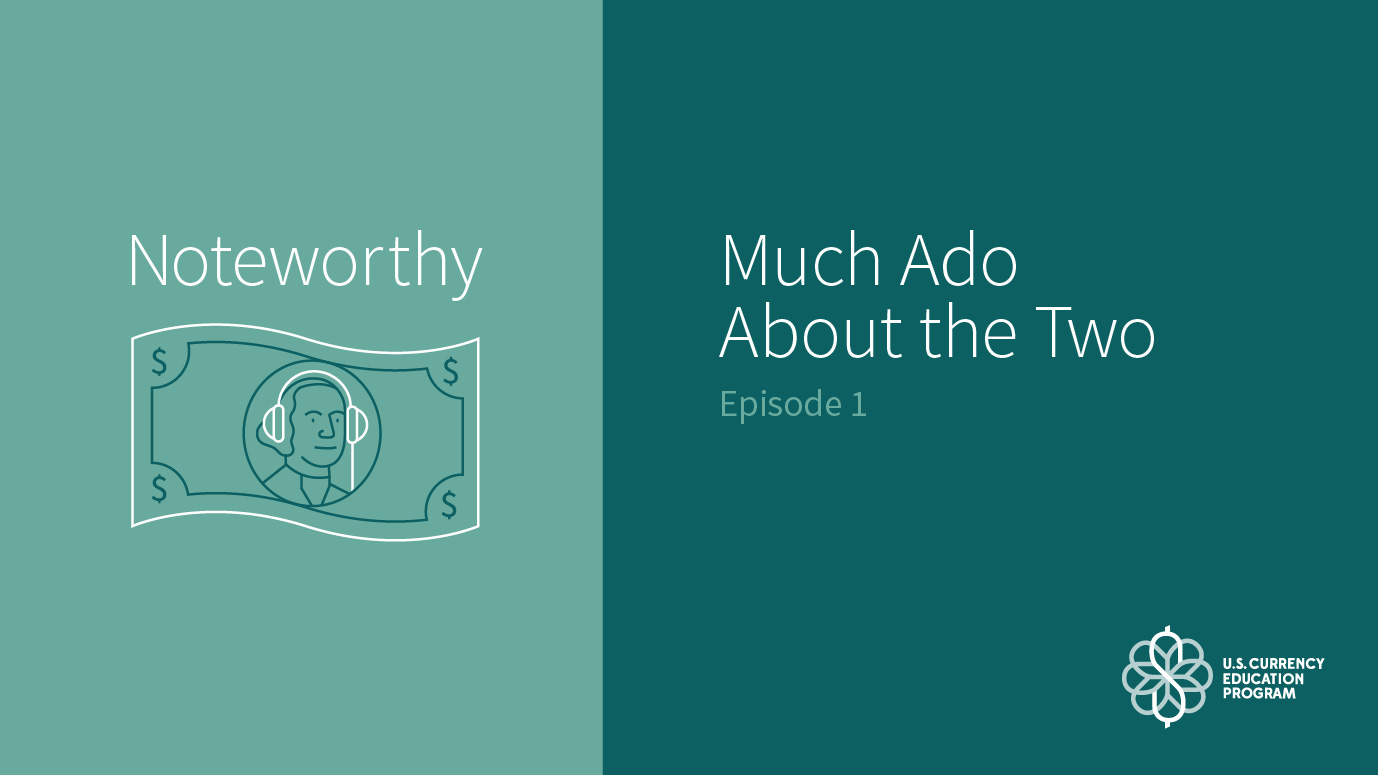 Much Ado About the Two

AUBREY: Hello listeners! Thanks for joining the first episode of Noteworthy, a podcast from the U.S. Currency Education Program.

ALEX: Welcome! Aubrey, before we get started, could you briefly explain what the Currency Education Program is?

AUBREY: I think that’s a great way to kick things off, Alex. The U.S. Currency Education Program is responsible for making sure that users of U.S. currency around the world have access to education, training, and information about Federal Reserve notes, you know, the money that’s in your wallet. U.S. currency has several security features to help users identify genuine notes and make it harder for counterfeiters to pass fake ones, and we want people to know what to do to protect themselves from potential counterfeit notes.

ALEX: Thanks for that overview Aubrey. You mentioned users of U.S. currency around the world?

AUBREY: Exactly. So, there’s about one-point-five trillion dollars’ worth of U.S. currency in circulation, and we estimate that about one-half to two-thirds of that value is outside of U.S. borders.

ALEX: Wow – so it really makes sense for the U.S. Currency Education program to reach out to people around the world.

AUBREY: Correct. So, we provide education in a number of ways, including digital tools like our animated videos, our website uscurrency-dot-gov, and now this podcast. Uscurrency-dot-gov is available in English and Spanish, with materials to download and order in over 20 languages.

ALEX: Speaking of the podcast…what topics can our listeners expect to hear about?

AUBREY: Yeah, we’ll cover a wide range of topics, because there’s lots to talk about when it comes to our money. We’ll talk a bit about the research and design for banknote security features, how we determine how many notes to order each year, who prints the currency, how do I report counterfeits, and why don’t I ever see two-dollar notes?

ALEX: Sounds really interesting. Who knew there was so much to learn about our money? So, where do we get started?

AUBREY: Why don’t we jump right in and talk about one of my personal favorites - the two-dollar note

ALEX: Ah yes, the two-dollar bill. To begin – I’d like to correct a common misconception. The two dollar note is in fact still issued by the Federal Reserve Board.

AUBREY: That’s a great point. I do think there is some confusion around the $2 note and perhaps some of that has to do with the fact that many people may not see it in circulation.

ALEX: Exactly. I rarely see a two. For example, when paying for something, I most often receive my change in ones or maybe a five. When’s the last time you saw a two, Aubrey?

AUBREY: Umm, to be honest I think the last time I received a two dollar note was as change after buying a box of Girl Scout cookies.

ALEX: And let me guess, you received the bill and it stayed in your wallet, maybe days, weeks, or even months passed by. Maybe it’s still there?

AUBREY: That’s right. I received the note and because I don’t see them as often, I actually held onto to it.

ALEX: And you are not alone in that behavior. In fact, what you just described helps explain why there is so much mystery around the two dollar note.

AUBREY: That’s exactly right. So, here are the Federal Reserve Board, we place an annual order for new currency from the Treasury’s Bureau of Engraving and Printing, or the BEP for short. And in fact the majority of the notes that we order each year are notes that we use to replace the money that we take out of circulation because it’s either too damaged or too worn for continued use. Each year we order new $5s, new $10s, new $20s, new $50s, $100s, and new $1s. But we don’t have to order new $2s each year.

ALEX: Yes, and that’s for a few reasons. First, two dollar notes aren’t typically used for everyday transactions, so they’re not circulating or passing between people very often, so the demand, while steady, isn’t as high for the two as it is for the other denominations. Because of this, we don’t need to order twos every year. Instead, we order them about every 2 to 4 years, as it’s more efficient to print larger batches of them, and then work down the inventory over the next handful of years. And because twos aren’t used as often as say, the $1 bill, $2 bills tend to take longer to show signs of wear and tear, which means they last longer in circulation. In short - the twos in circulation aren’t used as often as other bills are, so we don’t have to order as many of them. And the fact that they change hands less often means they wear out more slowly, which means we don’t have to order as many. It’s really all about perception. People think that the two is rare and so it’s treated that way.

AUBREY: Well, let’s talk about some of the implications for that perception. I know I’ve seen stories in the news about businesses not accepting twos.

ALEX: Yes, and I hope this podcast helps people to understand that the $2 note is a real piece of U.S. currency.

AUBREY: That’s right, and it’s important to note that it is U.S. government policy that all designs of denominations of U.S. currency remain legal tender, and that includes the $2 note.

ALEX: That’s correct. So, if you have a two from 1976 or from 2004, as long as it’s genuine the U.S. government considers it legal tender and fit for use. In fact, the $2 note was reintroduced in 1976 to commemorate Thomas Jefferson’s birth.

AUBREY: That’s right, Jefferson is on the front of the note. But, Alex, I’m curious. How do I know if the two note that I have is genuine?

ALEX: That’s a great question, Aubrey. Check out uscurrency.gov for information on the security and design features of the two dollar note, as well as all other denominations of U.S. currency. Our website also includes a lot of information about the history of U.S. currency, including the $2 note. For example, when the $2 note was reintroduced in 1976, it included a new vignette featuring the signing of the Declaration of Independence.

AUBREY: You don’t say? I guess I’ll have to go to the website to learn more. OK listeners, you heard it here. The $2 note is alive and well and you can find out more information about how to make sure yours is real by checking out our website uscurrency.gov. ALEX: Thanks for listening and we hope you tune into the next episode of

AUBREY: A podcast from the U.S. Currency Education Program.