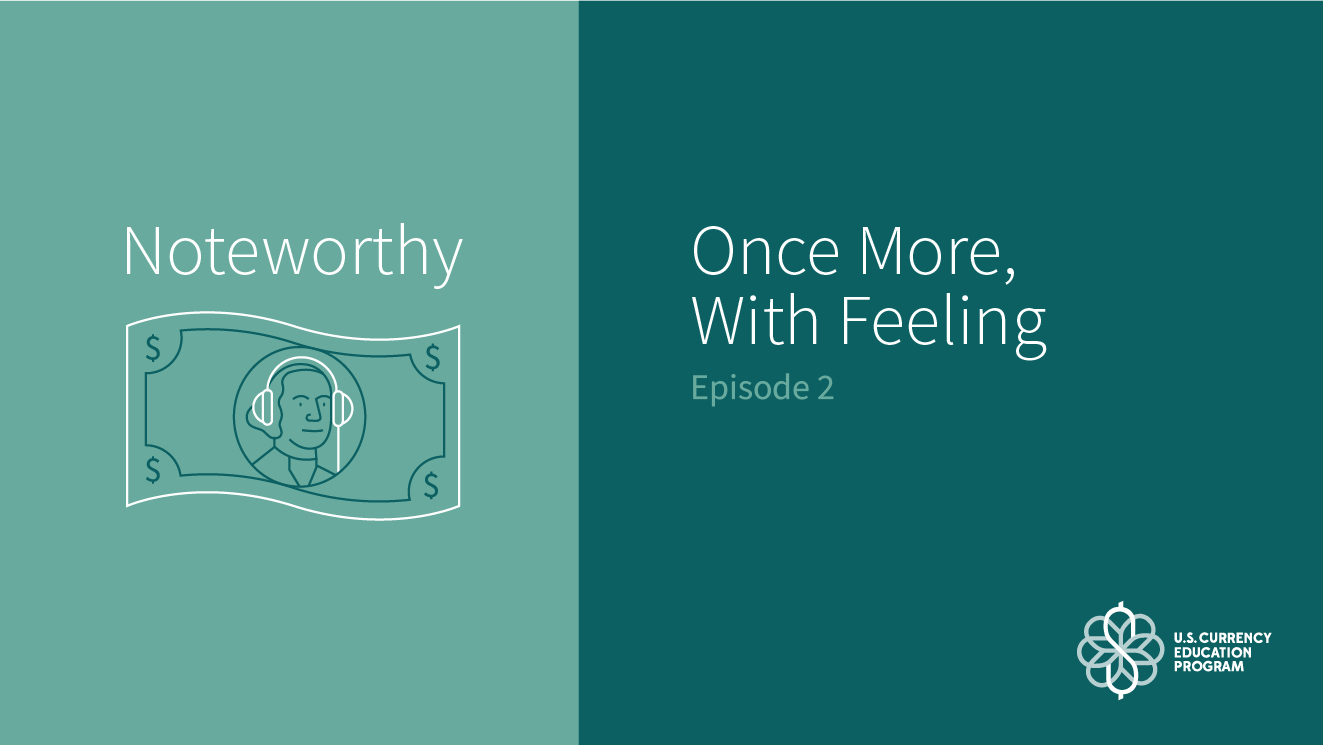 Once More, with Feeling

ALEX: Hello listeners! Thanks for joining another episode of Noteworthy, a podcast from the U.S. Currency Education Program. Today I’m honored to have Ayjah in the studio.

AYJAH: Hello everyone! So, Alex, what do we have in store for our listeners today?

ALEX: Today I want to focus on the senses – specifically touch, and the way it plays a role in how we determine whether our money is genuine.

AYJAH: Interesting. I’m not sure I ever paid that much attention to how our money feels.

ALEX: Well then let’s get started! But first, a question about laundry. Ayjah, have you ever accidentally left cash in your jeans and then, forgetting about it completely, put those jeans through the washing machine?

AYJAH: It’s funny you should ask that; I actually just did that last week. What’s weird about it is, I remember being really surprised at how normal the money looked after I found it. It looked pretty good for going through the spin cycle.

ALEX: [chuckles] Don’t try this at home listeners! U.S. currency is quite durable though, and that’s because of the special blend of materials it’s made of.

AYJAH: Special materials? I always just assumed it was made of regular paper. You know, now that you mention it though, it almost seems more like a fabric.

ALEX: Ayjah, you are spot on! Most paper that we use throughout the day is primarily made of wood pulp (think books, cereal boxes, and so on) but, U.S. currency is made of a blend of 25 percent linen and 75 percent cotton. It’s that special blend, in addition to a printing process called intaglio, which creates the unique feel. So go ahead – take a bill out of your wallet and feel it. What words come to mind?

AYJAH: Okay, one moment….[ruffling of wallet] hmmmm…I’m feeling cotton with…slight overtones of linen [chuckles]…but in all seriousness, it feels a bit rough.

ALEX: Exactly. U.S. currency is rough to the touch. Actually, lots of cash handlers have told me that the feel of the money is the first way they know if they have been given a counterfeit bill. U.S. currency just feels different and unique.

AYJAH: Agreed. It definitely doesn’t feel like computer paper, magazines, or other paper I’m usually dealing with. Looking at the bill in front of me, I’m seeing some red and blue fibers in the paper. Is that in each denomination?

ALEX: That’s a great question and an excellent observation, Ayjah. Yes, all denominations of U.S. currency have red and blue fibers. These fibers are actually embedded in the paper when it’s produced. A lot of people don’t realize this, but the watermark and the security thread in notes five dollars and
higher are also embedded into the paper during the paper making process.

AYJAH: That’s interesting. I guess I didn’t appreciate how important the paper is to both the feel and security of our money.

ALEX: Absolutely. But it’s not just the cotton and linen in the paper that give U.S. currency its unique feel, it’s also the intaglio printing. That’s the special printing process I mentioned earlier. Intaglio is an Italian word that means engraving or cutting, and it’s the name of one of the printing processes used to create U.S. currency.

AYJAH: Right! I’ve heard of intaglio. It uses large amounts of pressure and that pressure actually causes the bill to become embossed. It’s like pushing a rubber stamp really hard and causing the paper underneath it to retain an impression.

ALEX: Absolutely. That’s why we say that U.S. currency has raised printing. When you run your finger over a bill, you feel some roughness because of how much pressure was used during the printing process. If you take a close look, you’ll also notice the depth and quality of the print. Intaglio really
makes the portraits on the notes come to life.

AYJAH: That’s so true. I feel like these founding fathers are about to jump right off the bills! So both the type of paper used, which is a blend of cotton and linen, and the printing process, which includes intaglio, give U.S. currency that rough, distinct texture that we all recognize. But Alex, aside from feeling
the money, are there other things I should be doing to check if my money is real?

ALEX: That’s a great question, Ayjah. Check out uscurrency.gov for information on how you can feel, tilt, and check to see if the notes are genuine. It only takes a second! We’ll explore more of what makes U.S. currency unique and secure in other episodes. But for now, thanks for listening and we hope you
tune into the next episode of…